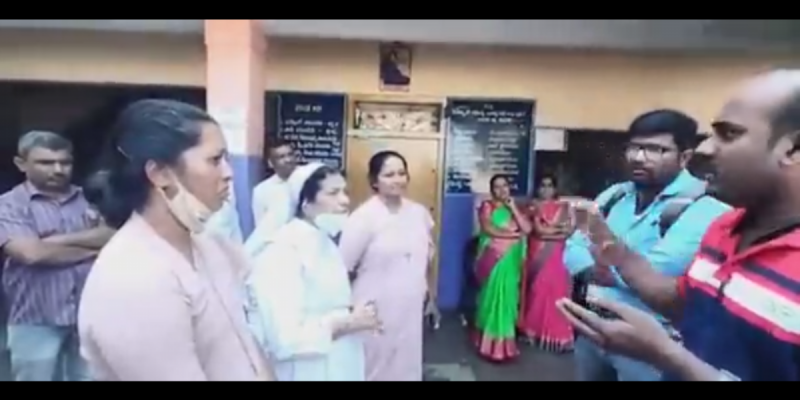 New Delhi: A group of right-wing activists broke into a convent in the Mandya district of Karnataka on Thursday, December 23, and disrupted an ongoing small Christmas party, threatening school officials in the process, NDTV reported.

Members of the Hindu Jagarana Vedike reportedly broke into the Nirmala English High School and College and harangued the authorities, asking them why Christmas was celebrated in the institution but not the Hindu festivals, the Indian express reported.

The incident was even caught on video where one of the intruders can be heard saying, “We leave that decision to you, parents. If we take this into our own hands, the situation will be different. “

Kanika Francis Mary, principal of the school said NDTV that Christmas is celebrated every year in the establishment but, in light of the ongoing coronavirus pandemic, school authorities have decided to cancel the celebration.

However, the students had pleaded with the school that a small gathering be allowed and even pooled their own money to buy a cake for the same.

A parent of one of the students opposed the rally and reportedly told some right-wing groups that the school preached Christianity and celebrated Christmas, but no Hindu holidays. Learning this, the members of these groups decided to force their way to school.

School officials filed a complaint with the police the next day, December 24.

Mary also alleged that Hindutva activists threatened to place a photo of the Hindu goddess Saraswati on the institution’s premises and even ordered them to celebrate Ganesh Chaturthi on the school grounds.

Karnataka has witnessed an increasing number of such attacks against Christians by members of right-wing Hindu organizations in recent months, since Karnataka’s recently passed protection bill. the right to freedom of religion was first proposed to the state cabinet in September.

Moreover, this attack on the school is, according to NDTV, the second such incident occurred on Thursday, the day the law (commonly known as the Karnataka anti-conversion law) was spent in the Vidhan Sabha.

The law met with stiff opposition both within the state assembly as well as in the outside world for its anti-Christian overtones, but it was successfully passed in the House.