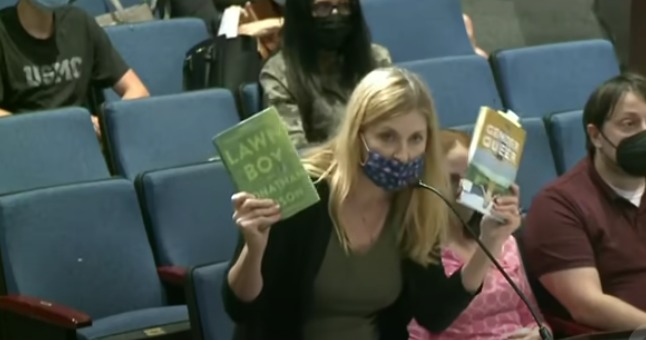 Concerned mother slammed one of the largest school districts in the United States for including sexually explicit books in their high school libraries, which she classified as “pornography” for their graphic descriptions of male sex acts and boys.

The parent of a student at Fairfax County Public Schools in Virginia read sexually explicit material aloud and shared graphic images from two books available at district high school libraries at a school board meeting Thursday. A video of her speaking to the board, uploaded by advocacy group Do Better FCPS, has received more than 300,000 views.

Stacy Langton explained, “After attending a September 9 school board meeting in Texas on pornography in schools, I decided to check the credentials at my child’s school, Fairfax High School.” Langton held up the two books chosen at the Texas School Board meeting, which are also available at several public high schools in Fairfax County. She said that “these two books include pedophilia, [and] sex between men and boys.

“The two books describe different acts,” she added. â€œA book describes a fourth-grade boy who performs oral sex on an adult male. The other book contains detailed illustrations of a man having sex with a boy.

She then read an excerpt from the other book, titled Lawn boy by Jonathan Evison: “What if I told you I touched another guy’s ass?” What if I told you that I sucked it? I was 10 years old but it’s true. I sucked Doug Goble’s d ** k, the real estate guy, and he sucked mine too.

As Langton argued that “it is not an oversight at Fairfax High School”, a school board member interrupted him and told him that “there are children in the audience here”.

In an article on Substack, Asra Normani, vice president of strategy and investigations for the parent rights organization, who attended the meeting, took issue with the claim that children were present at the meeting. .

Langton, who did not appreciate the interruption of his speaking time by the board member, added: â€œDon’t interrupt my time. I will stay here until my time is restored and my time is up. These books are in stock and available at the libraries at Robinson, Langley and Annandale High Schools.

Before his time was up, Langton responded to the board member’s assertion by saying, â€œPornography is offensive to everyone; it is offensive to common decency. At the end of Langton’s time, the school board attempted to introduce the next speaker, as many in the crowd cheered on the mother.

Langton remained on the podium as parents expressed their anger at the school board by chanting, “Go to jail!” As a security official attempted to escort him away from the podium, Langton alleged that “This sign is in violation of a Virginia state law called 18.2-376!” This card should be billed accordingly! “

The law cited by Langton is one of Virginia’s â€œCrimes Involving Morality and Decencyâ€. It states that “it is illegal for any person to knowingly prepare, print, publish or distribute, or cause to be prepared, printed, published or distributed, any notice or advertisement of any obscene representation or display.”

Another audience member remarked that “this is child pornography and each of you should be arrested for allowing this shit to be done in our schools and infecting the minds of these children.”

In response to criticism, board member Karl Frisch took to Twitter and implicitly defended inclusion of the book in high school libraries: â€œIt’s not every week that the school board receives two exorcisms during public comments. To be clear, nothing will disrupt our board’s commitment to LGBTQIA + students, families and staff. Nothing.”

It is not every week that the school board receives two exorcisms during public comments. To be clear, nothing will disrupt our board’s commitment to LGBTQIA + students, families and staff. Nothing. ???????????????????

Fairfax County Public Schools have issued a declaration Friday, announcing that “circulation of these books has been suspended, while a committee examines and makes recommendations on the text.” After describing the â€œRequest for Review of Library or Teaching Materialsâ€ process, the statement indicated that two committees had been formed to determine whether to remove books from schools.

VICTORY. BREAKDOWN @fcpsnews was hammered by calls + emails today from angry parents. At 4:46 p.m., his PR machine announced, “Circulation of these books has been suspended, while a committee reviews and makes recommendations on the text.” It’s always #Fairfaxxxpic.twitter.com/P60v8POYwE

â€œEach committee will include two teachers, two parents, a school administrator, a member of the Equity and Cultural Responsiveness team and two high school students. Each year, we identify potential committee members by working with our schools and regions. Committee members will be randomly selected from the list, but we will ensure that the selected students are 18 years old given the concerns. ”

The controversy is the latest example of school boards facing a pushback from certain subjects taught to children in public schools. In neighboring Loudoun County, Va., Parents read aloud similar literature their high school children were exposed to in a high school English class at a school board meeting last spring.

Earlier this month, Mayor Craig Shubert of Hudson, Ohio, called on the school board to quit or face criminal charges for authorizing a book called, 642 things to write.

Students were asked to write on the included instructions to â€œexplain a time when you wanted to have an orgasm but couldn’tâ€ and â€œwrite a sex scene you wouldn’t want to show your momâ€.

Concerns about the type of material children are exposed to in public schools have led to the founding of several advocacy organizations, including Parents Defending Education and the 1776 Project PAC, which seeks to “get school board members there. -lows that can actually start to turn the tide. ”

Ryan Foley is a reporter for the Christian Post. He can be contacted at: [email protected]